High inventories weigh on sentiment in the US PP market

share
High inventory levels continue to weigh on sentiment in the US polypropylene (PP) market, with participants currently anticipating that contracts might settle lower for a fourth consecutive month.

PP inventories in North America rose 19% between the months of September and December, according to data from the American Chemistry Council (ACC) and Vault Consulting.  Inventory levels reached their 2018 high point in December at a level 6.7% above the second highest inventory figure for 2018 recorded in November.

Debottlenecking projects added some capacity to the market over the past year, while operating rates also improved in recent months as some major plant outages from earlier in the year were resolved.

From the 2018 low point recorded in the week ended 14 September, propylene inventories more than doubled while inventories have also risen by 45% since the end of November.  The sharp rise in inventories has pushed spot prices for polymer grade propylene (PGP) to a 26-month low.

The dip in the spot market has generated anticipation that contracts may decline for a fourth consecutive month even after falling by a cumulative amount of 20 cents/lb ($441/tonne) in the three-month period between November and January.

PP contracts have posted equivalent declines over the past three months.  US PP contract prices are typically formula-based and are set at PGP values plus an adder.

Adders over PGP have been coming under pressure as inventory levels grow while demand has not shown any major signs of improvement despite the sharp drop in prices.

Traders active in the import market say that interest in overseas material has fallen dramatically as overseas producers are not willing to implement price decreases as steep as those seen for domestic material.

Export activity has risen significantly as sellers look to place their increased volumes. Most exports have been moving to Mexico and Central America, although traders are beginning to pursue other possible destinations.

“Bagging facilities along the Gulf Coast are mostly filling export orders for polyethylene (PE), so most PP exports are confined to destinations such as Mexico where material can move by rail,” a market participant stated.

ICIS assessed January contracts for homopolymer PP injection at 59-63 cents/lb delivered in bulk US while contracts block copolymer PP were assessed at 60-64 cents/lb with the same terms. 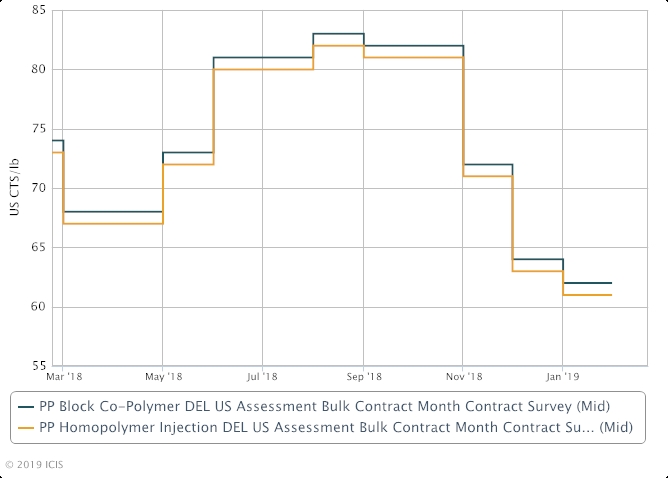