US January PS prices settle at decrease on lower feedstocks

share
Following a decrease of 7 cents/lb ($154/tonne) in December, US PS (polystyrene) prices have settled lower again – dropping by 2 cents/lb – in January amid lower upstream prices in December.

But, benzene and styrene spot prices have rebounded this month, which could lead to a price rollover or possibly higher prices in February.

Some expect Asia PS prices to increase a little ahead of the Lunar New Year in early February, which could have a knock-on effect on US prices.

There has been increased interest by Asian producers to move product to the US market.

Asian end-users from the downstream electronics sector are re-stocking to produce shipments headed for the US ahead of March, when the US-China 90-day truce comes to an end.

If Asian PS prices do rise in the near term, the primary thing that would keep them on the rise after the upcoming holiday is increased Chinese demand.

Chinese PS demand was expected to be strong last year following the Lunar New Year holidays, but it failed to materialise.

Demand in China last year was also lower than expected in several other markets, including styrene, acrylonitrile-butadiene-styrene (ABS) and expandable polystyrene (EPS).

This year, the Chinese market is dealing with continued trade tensions with the US and a slower economy, which could affect demand for the remainder of the year. 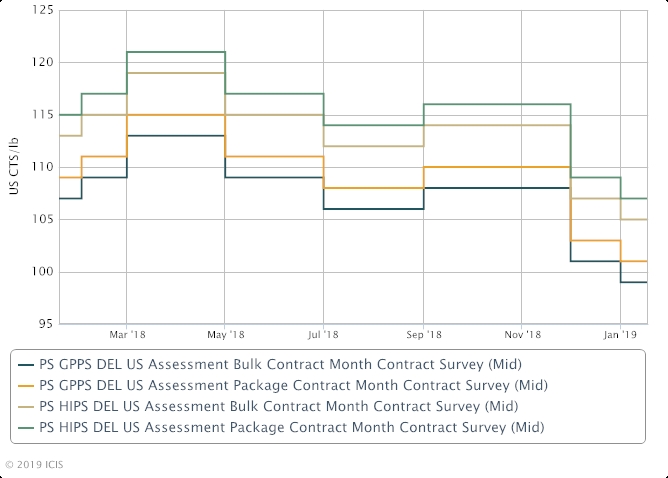