share
US ethylene spot prices narrowed with a slightly lower midpoint than the prior week amid a decline in upstream ethane costs, and as sentiment was hampered by anticipated production from new capacity. 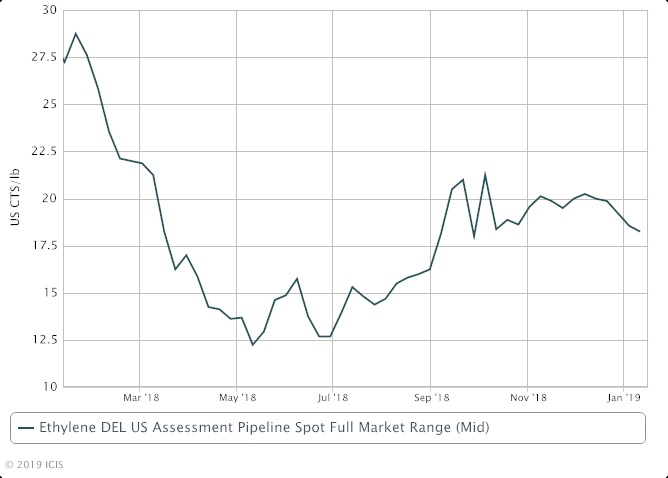 An Indorama cracker began start-up during December, with full production expected during 2019. Several more crackers are expected to start up in early 2019, including a Lotte Chem-Westlake joint venture cracker, a Sasol cracker and a Shin-Etsu cracker.

Ethylene spot prices had fallen to historic lows following the start-up of new capacity in 2018 and remained low during much of the mid-year as production outpaced demand. Spot ethylene prices began rising in the second half of 2018 as the increased demand on ethane feedstocks pushed costs higher and tightened cracker margins.

Narrow cracker margins and a decline in crude oil values, which brought down costs for heavier cracker feedstocks, encouraged the usage of heavier feedstocks for some crackers. The increase in heavier feedstocks, and cracker outages and production curtailments, reduced ethane demand and costs late in 2018.

New crackers coming on line in early 2019 are expected to increase demand on upstream ethane and may begin to push costs for the feedstock higher as in 2018. While the US has ample ethane for the planned crackers, logistical systems like pipelines and fractionation systems are limited.

Several projects are planned to expand these systems in the coming years, but ethane logistics are expected to remain limited over the next year or two, which is likely to keep ethane feedstock costs volatile.

Meanwhile, the new crackers coming on line in 2019 are expected to lengthen the ethylene market.

The ethylene market had become balanced in late 2018 amid production curtailments and increased consumption into downstream polyethylene (PE). New PE units that started up in late 2017 had been slow to ramp up, but PE production rates trended higher through 2018 and continued rising throughout the fourth quarter.