US December ethylene contracts settled for a majority of the market at a rollover from the prior month amid a balanced market.

The settlement puts December contract prices at 29.25 cents/lb ($644/tonne), steady with contract prices in November, as production curtailments and increased consumption has made the market more balanced.

US ethylene contract prices are typically settled at the beginning of the month for the prior month and take direction from production costs and spot prices. 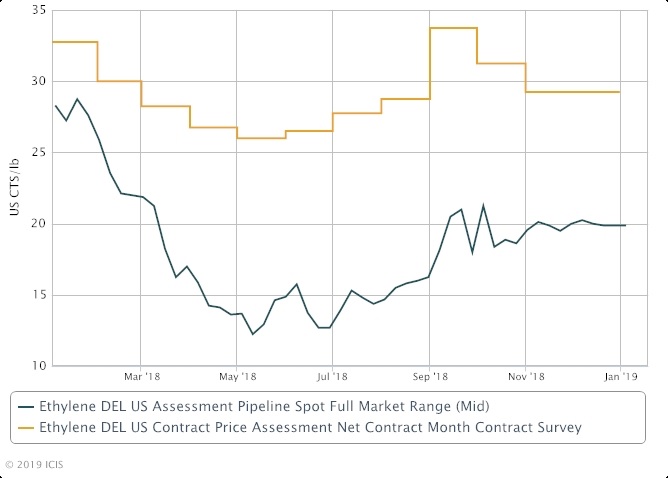 The ethylene market was lengthy during much of 2018 amid the start-up of new capacity, which also drove costs higher for feedstock ethane.

Some production outages, including two crackers which were offline for economic reasons during 2018 and two which had turnarounds in late 2018, helped reduce some ethylene overhang.

Ethylene consumption also increased as several new polyethylene (PE) plants – which had been slow to ramp up after late-2017 start-ups – increased production rates. Monthly PE production rates were significantly higher during 2018 than the prior year.

The production curtailments and increased consumption led to a decline for inventories in the third quarter to their lowest point in more than a year.

In December, ethylene consumption was further bolstered by the commissioning of a new Sasol PE unit.

Average spot prices in December were slightly higher than the prior month, market sources said.

Costs were slightly lower, led by a decline ethane feedstock prices. Ethane is the most common US cracker feedstock, but recent declines in crude oil values has pushed costs lower for other feedstocks like propane, butane and naphtha. 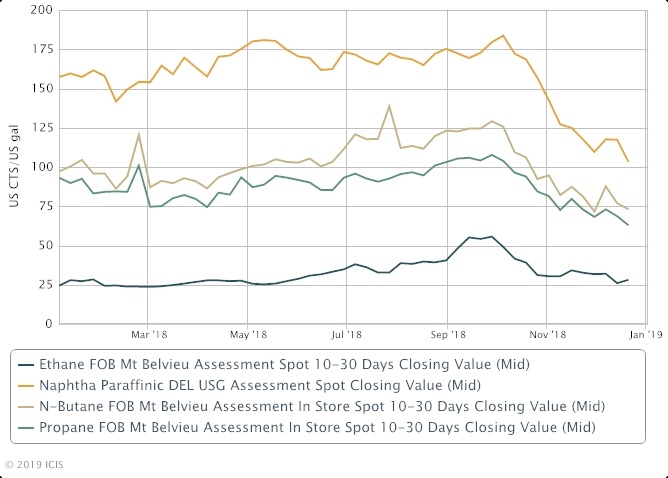 Heading into January, the ethylene market may not remain balanced amid further new capacity. An Indorama cracker was beginning start-up in December, with production expected in January. A Sasol cracker and a Shin-Etsu cracker are expected to start up in early 2019.

Major US buyers include Occidental Chemical and Westlake Chemical.